It was only after watching a great deal of House M.D. that I discovered that Hugh Laurie had penned a novel (published about a decade ago, now). I was intrigued. Clearly the man is an exceptional actor, but, as we all know, a great actor does not a great author make. Certainly both an actor and an author will have an understanding of the structure of a good story and the ingredients for interesting characters. Writing, however, is an art unto itself. 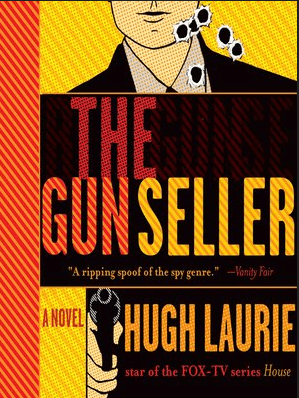 An art that Mr. Laurie is clearly in possession of.

The Gun Seller follows the fortunes of former Scots Guards Captain Thomas Lang when he is dragged into a worldwide conspiracy featuring all sorts of ne’er do wells like corrupt CIA operatives, terrorists groups, and unscrupulous arms merchants.

The Gun Seller is…a bit of a bugger to describe, actually. I suppose it could be said to be a spy/thriller novel; however, I can’t help but feel that this does the book a grave disservice. It is so much more than that. Others have classified it as a spy spoof, but again I feel they’ve missed the point. A spoof is a study in absurdity, a parody of an otherwise serious topic, whereas this book tells a very real and sometimes harrowing tale from the perspective of a man with a sharp tongue and a wicked sense of humour.

Laurie has chosen to write from the first person perspective, which is a courageous choice for a new author. It severely limits his options, because he can only work from the perception of his protagonist. However, Laurie does this masterfully, and from the first paragraph I was hooked and laughing out loud. The sheer quantity of laughs to be found in this book is astonishing, considering the seriousness of the themes explored, and I think it’s this humour that misleads some into seeing a spoof where none exists.

Laurie’s protagonist, Captain Thomas Lang (retd.), is a very endearing character whose irreverance and aforementioned sense of humour is strongly reminiscent of Laurie’s own. So strong is the association that I found myself picturing Laurie as Lang and felt that Laurie was almost writing an acting part he would love to play. Lang, under the charming boyish exterior,  is a very tough man indeed, who plays the ex-soldier-for-hire who’s in over his head with a great deal of panache and sincerity that challenges the stereotype. His supporting cast are all possessed of a great deal of depth, and Lang’s relationship to each of them remains central to the story throughout.

The plot twists and turns like a twisty turny thing, and I was left hanging on every word as the story slowly revealed itself. The suspense remains in place until the last paragraph, and I had no idea how it would end and was often  surprised at some of Laurie’s choices. The book does end rather abruptly, which might bother those who would wish to see the aftermath, but I feel that he ended it with admirable brevity and subtlety with a delightful little dig that should leave you wondering who the gun seller in the title really is.

In summary I think this book is in the must-read category for anyone with a taste for classic British humour and suspenseful, thought-provoking tales. It is lovingly written and explores the officially sanctioned yet darker side of the international arms trade as well as some of the less pleasant aspects of the human condition. This may seem incongruous when combined with the humour so liberally sprinkled throughout, but Laurie really makes it work. It seems his genius is not limited to the screen. I sincerely hope he will put pen to paper again.

Phillip is an Existential Psychotherapist and Teacher by day and a writer, gamer and all round geek in the hours of darkness. He claims to be enjoying the creative process enormously and secretly harbours the hope of publishing a novel one day... View more posts

5 replies on “The Gun Seller by Hugh Laurie Review”