“The Rose in Twelve Petals” begins Theodora Goss’s newly-in-paperback collection In the Forest of Forgetting, and the story makes an ideal introduction to the the author’s work. A retelling of the classic Sleeping Beauty story, it frames and then re-frames our expectations. The initial recognition of the familiar story pulls us into the the fairy tale mindset: of stories that map the small journeys and decisions that can unexpectedly lead to major life changes; of characters and encounters that we understand to be meant not quite literally, yet not as simple allegory either. 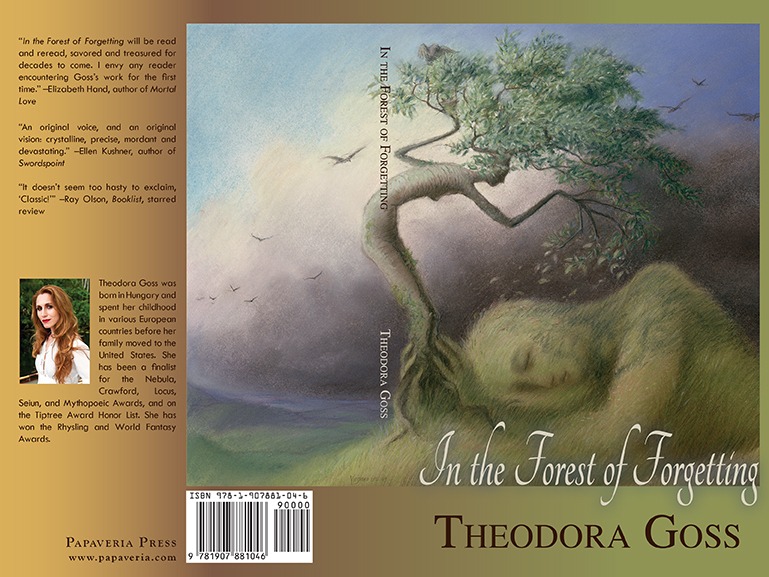 As the story progresses, the postmodern telling of the tale, the way that every character and every side are given voice (reminiscient of Pamuk’s My Name is Red), the way that the subtext of classic fairy tales — gender, class, politics in the largest sense of the word — are literalized, all serve to pull fairy tales into modernity, into history (often but not always our own). This mixture of old and new modes of storytelling recurs in the collection’s other fifteen stories: there are times, settings, characters and themes that appear again and again, similar but different, the original fairy tales of a multitude of parallel worlds. Throughout, Goss’s storytelling palette is made up of the strange day-to-day patterns of individual wants and desires, the certainties and uncertainties that make up our daily lives.

So it is with “Professor Berkowitz Stands on the Threshold,” where the titular professor is given the chance to choose between the certainty of his humdrum, largely failed academic and personal life, and the uncertainty of passing beyond an ambiguous threshold into a new level of existence. And so it is with the World Fantasy Award-nominated “The Wings of Meister Wilhelm,” about a man building a glider to reach an airborne city where his art will be appreciated (art and the appropriate audience for art are other recurring themes in the collection). For both Meister Wilhelm and Professor Berkowitz it is uncertainty, a lack of faith, that is the enemy of the artist.

He looked over the edge of the plateau. […] “That rock, he is high. I will die if the glider falls from such a height. Here we are not so high.”

The flip side (Goss again showing multiple sides to many stories) is seen in a pair of tales set in the author’s native Hungary. In “Letters from Budapest,” an art student rebels against the dull, utilitarian view of painting enforced by the Party’s Art Committee. Lured by the thrill of artistic certainty offered by a decadent painter in hiding, he horrifically discovers that there are choices even more creatively sapping than following the Party line. It’s a good story, and a brave one. “The Rapid Advance of Sorrow” is very much a parallel tale, of a similar place at a perhaps somewhat later time. A sparsely poetic, coldly beautiful epistolatory story, “Sorrow” is concerned with the certainty of revolutionary movements — aesthetic, and thus inescapably political — and the uncertainty that comes from rejecting conformity with them. I was reminded of Spook City’s fall to the Nothing in Ende’s The Neverending Story, as the silent revolution of entropy advanced across the artist’s community of Szent Endre. The sun now shines with only a “vague luminescence,” writes the nameless letter-writer who has refused to join the movement, and “I sit…not knowing if I will be alive tomorrow.”

Death is life’s great certainty; no surprise that the big D enters into many of these tales. Cancer is one of modern life’s foremost uncertainties, and it, too, figures prominently here. It figures most prominently in the collection’s title story, “In The Forest of Forgetting,” where a woman diagnosed with “lumps” casts aside the certainty of past roles — Patient, Daughter, Wife, Mother (which largely represent the cast of Goss’s new fairy tales, replacing Kings and Queens, Knights and Princesses) — in a mythologized journey toward a new, uncertain role and place. It is as heroic as it is tragic. “Lily, with Clouds” shows a similar journey from an outside observer’s viewpoint, as the so-certain worldview of a small town Southern matriarch is fractured when her prodigal sister returns home to die. If there is an unambiguous statement in Goss’s collection, it is expressed here:

“It’s frightening, if you think about it too hard. Maybe art always is.”

Mind you, Goss’s stories aren’t all grim. “Sleeping with Bears” is the delight of the collection, as the sister of a new bride goes from uncertainty (“I don’t understand why [my sister] decided to marry a bear”) to certainty (“I finally understand why my sister is marrying a bear”) in a story that pokes at notions of gentry and family history in the American South, while literalizing some of the earthy sexuality of classic fairy tales.

“The Belt” also touches on issues of class, gender and sex, continuing the familiar fairy tale of the male noble who marries a beautiful common woman past the usual ending of and they lived happily ever after. In fact, what “The Belt” does is replace the certainty of that typical fairy tale ending with an equal certainty, grounded in modern notions of psychology and class, that no such unilaterally happy ending could now be possible when both sides are considered.

The story is presented with such a feeling of earnest good advice, however, of empowerment for both women and men, that to me it felt optimistic rather than pessimistic — some new, truer form of happy ending, the story suggests, may now be possible. Your mileage may vary.

I will tell you, too, that every fairy tale has a moral. […] But I do not know which moral is the correct one. And that is also the way of a fairy tale.

The stories mentioned thus far involve characters coming to terms with external certainties and uncertainties. There is another type of story in Goss’s collection: the wishing stories, stories where characters drive the outcome through their desires. Emblematic of these wishing stories is the recurring character of Emily Gray, an ephemeral fay spirit of enigmatic motivations.

It is in the collection’s penultimate story, the Nebula Award-nominated “Pip and the Fairies,” that all the strands of Goss’s storytelling come together most superbly. Philippa Lawson is abandoning her acting career and returning to the home of her childhood, where her mother wrote children’s books, fairy tales.

Philippa no longer knows whether those stories of Pip and the fairies were based on her own true adventures, told to her mother, or if her mother’s stories have colonized her memories of childhood. “How did it begin?” Philippa wonders; the question is as important as how it ends, perhaps more so. The story is Goss at her best, speaking to both the child’s love of fairy tale, and the adult’s sense of survival and need to ascertain. It combines many of the themes and devices of the collection’s previous stories — the wishes, the threshold, the mother taken by cancer — while stacking layer upon layer of certainty and uncertainty. It’s good; it’s very, very good, a heady mix of Pan’s Labyrinth, Carroll’s The Land of Laughs, and Goss’s own unique magic. I’d very much like to tell you that the ending — devastating, heartbreaking, and yet transcendent — is uncertain, as I have with so many of these other stories…but I don’t think that I can.

The way themes of certainty and uncertainty pervade In the Forest of Forgetting, it is no surprise that on the rare occasion a story does disappoint, it is usually because of issues with these same themes. In some stories the authorial certainty Goss exerts feels at odds with the uncertainty she seeks to evoke. The authorial certainty in dividing up “The Rose in Twelve Petals” into its twelve sections, for example, feels in conflict with the narrative uncertainty Goss uses to end the tale; the end feels a little too obviously a Statement. Similarly, for the section in which Professor Berkowitz must decide whether to pass through the threshold to be titled “Faith, like a Seagull Hanging in Mid-air” presages the nature of the professor’s testing, signals too clearly that the author is in control and knows in advance what will happen. These are stories that reveal too soon that only one thing can happen, where Goss has left no room for the story to surprise herself. Or in some cases her readers: several other stories seemed to go on too long, to explain too much, too neatly. “I assumed it was perfectly clear,” says Miss Emily Gray in her eponymous story: “I was sent to make come true your heart’s desire.” Miss Gray is saying this to a child, however; to most adult readers it will be perfectly clear.

The explaining permeates even the book’s introduction. Goss here shares not only some of her personal history — she and her divorced mother traveling from Hungary to Italy, Belgium and then up and down the Northeastern United States — but also how she feels these experiences have impacted her writing in its concern with place and displacement, with borders and irrevocable crossings.

It’s useful and interesting information, but often the relentlessly biographical analysis does no favors. For some readers it may deuniversalize the stories, rendering the tales purely commentary on the author’s personal experiences. It can also lead to lazy analysis. We can note that in nearly all of Goss’s stories, you cannot, or should not, go home again — but how do we explain the brilliant ambiguity of “Pip and the Fairies” in that regard? Or it is tempting to say that Goss’s prose has the elegant, mannered precision of someone to whom English is not a first language, who learned not just (as most schooled from birth in the USA learn) how words are used, but also what and how they mean.

This sort of simple reductionism, though, is unfair to the author. How many other non-native writers of English (to say nothing of natives) have Goss’s lyricism? How many born abroad have her perceptiveness in identifying the mythologies of the United States: the Northeastern USA’s fascination with the post-Civil War South, for example; or the way many of her older foreign characters regard service in Viet Nam as a badge of belonging. How many writers have her Peter Beagle-like ability to instantiate complex modern concepts via the language of story, making a place for the fantastic and fabulous in modern literature? And indeed, how many people have her drive to create and share stories?

For that is also, I think, one of the core themes of In the Forest of Forgetting. The transmission of story, and in particular of fairy stories, occurs throughout the collection: in some cases stories are shared by oral storytelling; in some cases by books, or letters; in some cases they are written on scavenged pieces of driftwood and cast out to sea. In all cases fairy tales serve to create, and to symbolize, a sense of personal history and place.

Their value is not that they grant understanding, but that they encourage us to seek understanding, to see and act on the complex truths of the world. Paradoxically, the words of fairy tales tell us not to ignore that which cannot be directly put into words; they acknowledge our sense that there are certainties, even if we cannot always be certain what they are. If the modern world has become a poor place for classic fairy tales, as several of the stories herein suggest, the answer Theodora Goss proposes is not that we forget fairy tales altogether, but rather that we create new fairy tales for our new age. She has certainly created several excellent ones in this collection.

Matt Denault has never lost the seriousness of a child at play—especially when it comes to reading. He lives just outside Boston. View more posts