Escapement is the sequel to Jay Lake’s critically acclaimed novel Mainspring, wherein he maps out an alternate Earth anno 1900. Lake has quite cleverly constructed a world that for the most part resembles ours yet differs in one very important aspect – Lake envisions the universe as an enormous clockwork whose brass mechanisms are, mostly, visible to the naked eye. Thus Earth is powered by a mainspring, hidden in its core, it circles around the Lamp of the Sun on a brass rail and it is divided by an enormous equatorial wall, topped by a brass gear train that physically connects the planet itself to its orbital trajectory around the sun. 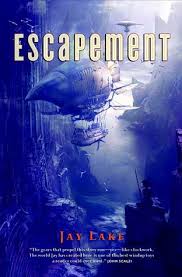 The inspiration behind this somewhat unique piece of world-building appears to come from Enlightenment philosophy. For example, Lake borrows the Deist idea of God as the Divine Watchmaker. The watchmaker analogy was a popular theological argument for the existence of God in the 17th and 18th centuries, used by prominent thinkers such as Descartes, Voltaire and others. The idea of the Divine Watchmaker also functions as a device for explaining the structure of the universe, as it was understood in light of Newton’s physics. Jay Lake has not only successfully tapped into these rather abstract philosophical arguments and made them concrete and tangible; he has also managed to work these elements into an alternate theology (the Brass Christ sacrificed on the Horofix) as well as work the Enlightenment theological debate into on of the overriding plot devices.

In both Mainspring and Escapement the narrative is driven forward by an underlying conflict between two groups, the Rational Humanists and the Spiritualists, who have organized themselves into two global secret societies. The Rational Humanists reflect the Deist position that rejects the notion of a revelatory theology and instead argue that only reason can lead to any basic religious truth. They see Creation as an intricate mechanism that, though started by God, operates solely by the laws of nature. This position is countered by the Spiritualists, who believe in a theology of revelation and that the course of history can be changed through divine intervention. The theological debate is not only one of the underlying themes of these novels; it is, in many ways, integral to the plot itself since the characters are moved as pawns in a game between two secret societies – the rational humanists of the Hidden Order and the spiritualists of the Order of the White Birds (the avebianco).

The narrative of Escapement picks up two years after the events of Mainspring and it features two minor characters from the first book, Chief Petty Officer Threadgill Angus Al-Wazir and librarian Emily Childress, as the main protagonists along with Paolina Barthes, a child genius who has grown up in an extremely isolated village on the equatorial Wall. Paolina is a genius of Newtonian proportions and when encouraged by the shipwrecked loblolly boy from the airship Bassett (featured in Mainspring), she constructs a clockwork-device that has the potential to change or unmake the world. Because she is a girl, her efforts are actively suppressed by the men of her village who view her as an aberration from the natural order of things. Thus Paolina sets out on a long journey, heading for England, in order to escape the suffocating confines of her home.

Emily Childress is a librarian at Yale University in New Haven and the member of the Secret Order of the White Birds – an order dedicated to the preservation of knowledge as well as the belief that God intervene directly in Creation. In Mainspring she set the boy Hethor on his quest to rewind the mainspring of the Earth. Now, she is blamed for the death of William of Gaunt, a sorcerer of the Hidden Order and is to be sacrificed as a scapegoat. On route to Europe, her ship is attacked by a Chinese submarine and Childress falls into the hands of the English Empire’s primary enemy. In order to survive, Childress must take on a new identity, which in time gives her insight into her enemy’s plans – plans that might be of extreme danger to Northern Earth.

Al-Wazir is one of the few who survived the loss of the airship Bassett at the Wall (as recounted in Mainspring). He returns to England after nearly two years, only to be subjected to a court-martial and sent to Scotland. Shortly hereafter he is recalled into service as his knowledge of the Wall is needed in a new, and very secret, project of her Imperial Majesty’s government. He is to lead a group of soldiers and engineers to the Wall, where they will attempt to drill a tunnel that opens up Southern Earth for English expansion. However, things do not exactly turn out as planned…

Escapement is in many respects a much stronger novel than Mainspring, mainly because Jay Lake here moves away from the use of predestination as the primary narrative force. One of Mainspring’s greatest flaws was a sense of predestination at work in Hethor’s quest. The reader never really doubted that Hethor would fulfil his obligation and save Earth. Furthermore, plot holes where sometimes glossed over and the many “coincidences” that facilitates Hethor’s quest put a certain amount of strain on the reader’s suspension of disbelief – all in all, the plot of Mainspring is too neat and too well-ordered to really engage my interest. Luckily, Jay Lake ups the ante in the sequel, Escapement. Since he has already drawn up the basic architecture of his world in Mainspring, Lake uses Escapement to delve deeper into this wonderful and strange vision of an alternate 19th century Earth. Where Mainspring was a story about restoring the order of the world – signified by the rewinding of the Earth’s power source – Escapement is a story that questions this order in different ways, something that is played upon in the title of the novel. In mechanical clockworks, the “escapement” is the element that regulates the motion of the entire system. But the word also recalls words such as “escape” and “escapism”, which touches upon some of the novel’s underlying themes. As a piece of fantasy fiction, Escapement certainly qualifies as “escapist” in the sense that it offers the reader a momentary escape from the humdrum of daily life. The notion of “escape” is, however, an integral theme of this novel, closely related to the questioning of the reigning order of this world. Thus Paolina and Childress question the belief that sees women’s subservience to men as the natural order of the world – they both yearn to escape the confines they live under simply because they are women. I’m very happy that Lake engages with gender issues in this novel, something that I felt lacking in Mainspring – especially as he took pains to inform the reader that people generally applied the laws of nature as an argument in favour of the status quo of social relations. Of all the characters, Childress is perhaps the one who is offered the most complete escape from who she is, of how she is defined by others as well as herself. She is also the one who most completely takes advantage of events to redefine herself as a woman of authority and knowledge. Because of this, Childress remains my favourite character of this novel. Then again it is rather unusual to use a middle-aged spinster as a protagonist in fantasy fiction.

Jay Lake’s Escapement is a vastly entertaining steampunk fantasy that reminds me of the kind of 19th century adventure novels that made Jules Verne and H. Rider Haggard very successful. In lake’s alternate universe, the vertical continent of the Wall functions much in the same manner as Africa does in the writings of Haggard – as an uncharted territory, filled with strange creatures and wondrous civilization, a place of mystery and adventure. Lake’s novel is in many ways a rather strange entity, a rollicking adventure that incorporates not only a dash of feminism but also some rather obtuse notions derived from 18th century philosophy and theology – a combination that looks ridiculously impossible on paper and it is a testament to Lake’s skill as a writer that he manages to make these rather disparate elements work beautifully together in a fast-paced and highly entertaining novel. There is, in fact, not much to criticize about Escapement. The only thing that really bothered me was that the narrative doesn’t really come to any kind of resolution at the end of the book and I can only hope that Lake will either continue the story or tie up its loose ends in his forthcoming novel Tourbillion.

Trine is a thirty-something Danish art historian, who in her spare time is a voracious reader of wide-ranging preferences. She has a decided penchant for well-written and intellectually challenging fantasy and sci-fi, but she also enjoys historical fiction and biographies while urban fantasy and chick-lit remain guilty pleasures.  View more posts