The award winning Patricia A. McKillip is one of the prominent authors within fantasy fiction, but whereas notable masters of the genre like J.R.R. Tolkien and George R.R. Martin work on an epic scale, McKillip’s fantasies are more intimate and dreamlike. The Book of Atrix Wolfe can in many respects be likened to the detailed and colourful tapestries of the late medieval period, where vividly archaic figures of humans, animals and mythological creatures are intertwined with a myriad of organic ornamentation. 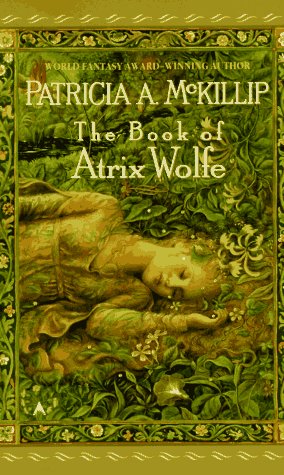 Supported by a wonderfully lyrical and sensuous prose, the McKillip weaves an evocative and enchanting narrative composed by motifs and themes from myth and fairy tale (fx the Wild Hunt, the Horned Hunter, the Faerie Queen) that she elegantly re-orders and re-interprets into something entirely unique.

The Book of Atrix Wolfe is a story about the use and misuse of power, and about accepting responsibility for one’s actions. The story opens on a snow-covered battlefield where the martial king of Kardeth lays siege to the seat of the king of Pelucir. One night the famous mage Atrix Wolfe wanders into the army camp hoping to persuade Riven of Kardeth to end the war in order to save his own country, the neighbouring Chaumenard. Rebuffed by Riven of Kardeth, Atrix Wolfe puts all his anger and bitterness as well as all the horrors of war and winter into a magical working that can drive away the invaders. But sometimes good intentions can have bad consequences. Wolfe unleashes something dark and dangerous on the frozen battlefield, and it continues to haunt him many years later.

Twenty years later, the young Talis of Pelucir returns to his brother’s court after having studied magic in Chaumenard. He brings with him a book of spells that he has found under some rather odd circumstances. Experimenting with the spells, Talis inadvertently summons the dark Hunter, the magical working that killed his father and laid waste Pelucir twenty years ago. These events bring Atrix Wolfe out of his self-imposed exile and together he and Talis search for a way to banish the Hunter. At the same time, the elf-like Queen of the Wood meddles with their plan, demanding their help with finding her missing daughter, which is, in fact, connected to making of the Hunter. Meanwhile, the key to the unravelling of these mysteries has perhaps been in Pelucir all along – in the form of a mute, retarded scullery maid named Saro. She has a vision of Talis being in danger and therefore sets out to acquire language in order to warn him.

Sound in the kitchen has always been a constantly changing tapestry woven for a moment, frayed, rewoven with threads spun from the spattering of onions over the fire, the rhythm of mincers’ knives on hardwood, the head cook’s brittle impatience, the undercook’s feverish hysteria, a peeler wailing, the tray mistress’s exasperated sibiliants, the milk scalding, meat spattering down into the fires, wood snapping and groaning, the changing voices of fire as it leaped into new wood, hungry as a spit-boy, or, sated, caressed by the darkening coals and murmured.

Without language, Saro exists immersed in the domain of the material, and of the senses, whereas the two mages use their power to control and manipulate the material world through a mastery of language. The power of language is, indeed, a recurrent theme throughout the novel. Saro has no language and is therefore vulnerable and powerless, and Atrix Wolfe’s spell book is dangerous precisely because its words don’t correspond to the underlying meaning:

Talis said, hunced over his cup, scattering words do he didn’t have to think: “The book is a lie, words in it are untrue, the spells go awry. He was writing one spell and thinking always of another. That’s why the book is so dangerous. He wrote down ‘mirror’ but thought ‘Hunter’. He wrote ‘water’ and thought ‘Hunter’. The words twisted in his thoughts, in his writing of them. Because he is so powerful, each act must ne unambiguous. And he hasn’t had a thought without the Hunter since that night.”

This is, as said, ultimately a story about the power of language, of language as a form of magic that catches and shapes the fragmented impressions of sensuous detail into meaningful patterns; something that is demonstrated in McKillip’s prose in the way that the language oscillates between narrative flow and expressive imagery. At one point, one of the characters describes magic as a language of wonder and horror and McKillip’s novel is in many ways a story about the power of language to enchant (both literally and figuratively) as she weaves a rich, subtle and poetic tapestry of words around the spell-bound reader.

Apart from the connection to language as mastery and enchantment, McKillip portrays magic as a somewhat nebulous and boundless force. The great mage Atrix Wolfe can manipulate both the elements of the material world and the intangible realm of feelings, images and memories. He changes shape as easily as drawing breath. Throughout the story the boundaries between the material and the immaterial, between subject and object remain extremely porous – something that McKillip’s prose often conveys beautifully in an elegant flow of imagery:

He ran, in wolf shape, faster than any wolf; he was a shimmer of icy wind blowing down the mountain’s flank, the white shadow of his own legend, barely perceptible, moving swiftly, silently, under the staring winter moon, toward the eye of the terrible storm: the castle of the Kings of Pelucir.

This quality of boundlessness is also the mage’s greatest weakness. His ability to melt into different forms and materials also affects his sense of self and his magic thus requires an iron-willed discipline to control. The dark power that haunts Pelucir is the direct result of a momentary lapse in Wolfe’s self-control, a lapse that he has failed to accept responsibility for. This touches on several intertwined themes throughout the novel – sorrow, remorse and redemption. Wolfe can thus only banish the Hunter when he acknowledges and confronts his magical working as the expression of his own inverted self, i.e. the darker elements of himself, a theme that is supported by McKillip’s use of mirror-images, reflections and inversions.

The Book of Atrix Wolfe has many thematic similarities with Ursula le Guin’s Earthsea saga – mainly regarding naming and magic, and the question of self-knowledge and personal responsibility. However, unlike le Guin’s spare yet lyrical style, McKillip fashions a sumptuous tapestry of resonant imagery, her prose both ornate and embellished, which infuses her narrative with a wonderful poetic and slightly unreal quality. Reading McKillip is, in many ways, like delving into a dream where time moves differently. Her writing is rich and strong, and should be savoured slowly.

Trine is a thirty-something Danish art historian, who in her spare time is a voracious reader of wide-ranging preferences. She has a decided penchant for well-written and intellectually challenging fantasy and sci-fi, but she also enjoys historical fiction and biographies while urban fantasy and chick-lit remain guilty pleasures.  View more posts