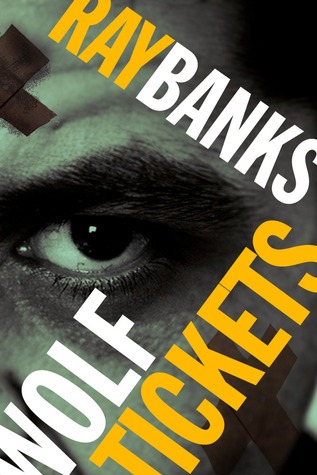 Wolf Tickets is a weird book for me, because it’s the only one I ever wrote knowing full well that there was very little chance of it getting published. It wasn’t the subject matter, per se – hidden money, button men and treacherous women aren’t exactly new concepts in crime fiction – but its origins and, for lack of a better word, style.

The origins I’ve talked about before. To make a long story short (too late), I started Wolf Tickets as a brief, fun collaboration called “Blag” with Ken Bruen. Yeah, I couldn’t believe it either. I was (and remain) a nobody back in, what was it, 2005? I had the deal for Saturday’s Child and Donkey Punch (later to be renamed thanks to a squeamish, yet ultimately correct US publisher) and decided to take Bruen’s ball and run with it (with his blessing of course) as a palate-cleanser between the first two Innes books. It was the fastest I ever wrote a book, though I did have a solid first chapter thanks to Dr. B, and ended up taking six weeks all told. The trouble was, my contract was for Innes, not Wolf Tickets, and so Farrell and Cobb were consigned to the virtual filing cabinet.

The style wasn’t that much different from the Innes books, especially Saturday’s Child – two duelling narrators, one of whom had a pronounced regional accent, and both with a proclivity for the profane. Where it differed was that with Innes you had a good guy. Flawed, yes, but essentially your “hero”. With Wolf Tickets, neither man was particularly agreeable – on the one hand you had a dog-killing drug dealer, on the other a thuggish shoplifter – and that was a much harder sell. Similarly, the language was even more forcefully profane than in either Saturday’s Child or The Big Blind, and the reception of both sometimes hinged on how repellent that “bad language” was, as well as what was perceived as parochialism in both attitude and slang. There remains the somewhat disingenuous belief that readers (American readers in particular, I’m sad to say) can’t deal with slang. My experience has been somewhat different – perhaps your dreaded Occasional Reader might have trouble, but I’ve found that most discerning readers are perfectly capable of reading between the lines or else – shock horror! – looking that shit up on the Interwebs. Anyway, the more negative reactions to the Innes books made me think that maybe Wolf Tickets was better off staying where it was.

Wolf Tickets stayed in that drawer for five years, fermenting, growing fuzz and generally stinking the place out. And then along came Steve Weddle, no doubt thinking that musky odour belonged to Your Humble Narrator. He’d been looking for longer form stuff for Needle magazine (a fine, fine publication that you should pick up forthwith) and the smell was beginning to bother me so I asked him if he fancied a butcher’s at Wolf Tickets. He agreed, he liked, I said I’d have to rewrite it, he said okay, I said did he want to come out for some drinks and maybe suck face later, he said he didn’t think of me that way, I said he would if he gave me five minutes in a darkened room, he decided he didn’t want Wolf Tickets after all, I decided that there was no use pursuing the kind of intimacy I have now with Blasted Heath, we agreed to keep it on a strictly professional footing, and, finally, after much emotional energy and some careful redrafting, Wolf Tickets appeared as a three-parter in Needle.

Needle was the test for me. If I’d done a decent enough job on the rewrite, then it would find a few discerning readers. I must have done okay, because what feedback I got was universally positive. There were no complaints about the amorality of the protagonists, the violence, the slang, the profanity or the more scatological, politically incorrect gags. I can’t emphasise enough how welcome that feedback was, especially considering my apparent inability at the time to write anything even slightly attractive to a publisher.

If you’re not aware of Mr. Stanhope’s oeuvre, I’d suggest you have a look-see. Not everyone’s cup of hot Bovril, but worth a peek. For UK readers, he does frequent guest spots on Charlie Brooker’s Screenwipe, and he’s appeared in various US shows, most recently in a guest spot as a suicidal comic in Louie. Anyway, I was watching Stanhope and he happened to bring up cock fisting as an example of something a small, but dedicated band of consenting adults were keen to do in their spare time. And I got to thinking about how just because something was a niche pleasure, it didn’t necessarily make it a bad thing. You see, somewhere along the line my writing self-esteem became reliant upon, and corrupted by, my apparent commercial worth. And that, chillun, is the first doddering step down a slippery slope towards self-loathing and screaming at strangers.

Ray Banks shares his birthday with Chuck Barris and Curtis Mayfield and screeched into the world on the same day that Roberto Rossellini took his leave. He has worked as a wedding singer, double-glazing salesman, croupier, dole monkey, and various degrees of disgruntled temp. He likes to think of himself as a writer these days, having written a few books and considerably more short stories. He currently lives in Edinburgh, where he’s been known to falls into fits of curmudgeonly behaviour that normally involve foul language and lewd gestures. View more posts