Some reviewers have been comparing The Raw Shark Texts to the movie Memento. It’s a largely uninspired comparison based solely on the fact that both protagonists share some form of memory loss. But it’s a superficial comparison at best and probably only lasts for the first 30 pages or so. Since the Raw Shark Texts becomes, in part, a sincere meditation on the nature of love, the power of its loss and the great lengths one is willing to go to re-capture it, a closer film comparison might be to a movie like The Eternal Sunshine of the Spotless Mind, a movie that also, in its own way, deals with fractured memory loss. 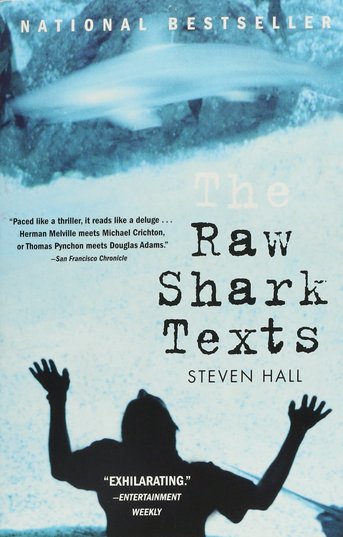 I’ve had this book sitting on my shelf for a number of months now, since before the publication, and, as has happened to all of us, other books vied for my attention. I’m sorry that it took me so long to read it and wish that I had done so earlier. I finished the book a little more then a month ago and I cant get it completely out of head and perhaps more importantly I want to re-read it to see if all of the puzzle pieces fit properly the second time around and also just to enjoy the story again. The central story is about a woman who dies and the man who keeps her memory alive but if it sounds like a conventional story I assure you its not.

The wholly original antagonist of the novel is a conceptual shark.

The animal hunting you is a Ludovician. It is an example of one of the many species of purely conceptual fish which swim in the flows of human interaction and the tides of cause and effect. This mat sound like madness, but it isn’t. Life is tenacious and determined. The streams, currents and rivers of human knowledge, experience and communication which have grown throughout our short history are now a vast, rich and bountiful environment. Why should we expect these flows to be sterile?

Life will always find a way. Just look at you and me and see the truth in it.

I don’t know exactly how the though fish came to be in the world, but in the wide, warm pools of society and culture, millions of words and ideas and concepts are constantly evolving. It doesn’t seem too implausible that one of them elevated itself above its single cellular cousins in much the same way we did. The Selfish Meme?

The Ludovician is a predator, a shark. It feeds on human memories and the intrinsic sense of self. Ludovicians are solitary, fiercely territorial and methodical hunters. A Ludovician might select an individual human being as its prey animal and pursue and feed on that individual over the course of years, until that victim’s memory and identity have been completely consumed. Sometimes, the target’s original self and memories have been taken. In time, such a person may establish a ‘bolt-on’ identity of their own, but the Ludovician will eventually catch the scent of this and return to complete its kill.

It’s an exciting and well thought out idea and Hall really gives it a good work out so that it never becomes gimmicky.

Hall also makes great use of thriller elements in The Raw Shark Texts to really drive up the tension. But more importantly these moments where the Ludovician abruptly infringes upon Eric Sanderson’s world serve to make the shark more real and more dangerous. The idea behind the conceptual shark may be an abstract metaphysical one but the form that it inhabits is one that we recognize and fear. There are some really exiting scenes in The Raw Shark Texts.

The action packed finale of the book was riveting and stunning in its imaginative execution. There are some great uses of really clever defense mechanism against the shark. Before the characters embark on their final departure they must first construct a vessel in which to chase and fight the shark. This is the highlight of the book. Dr. Trey Fidorous, a mentor of sorts to Sanderson, constructs a boat out of computers and everyday objects. As he is doing this the reader knows specifically what boat he is building, even though he never says so. Then when he finally explains the boat construct to Sanderson he reveals that we were right. More importantly we were involved in a synergistic creation of a pop culture archetype that links the reader to the text in this one great moment.

The ending is ambiguous but is perfect for the story. Please count me as a proud Un-Space Exploration Committee member.