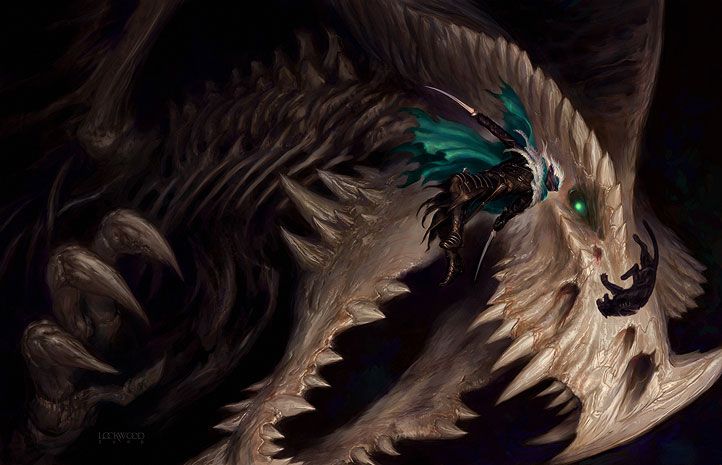 When you think of the most popular character from the Wizards of the Coast stable, I do not think there is much debate. Drizzt Do’Urden leads the pack. Today we have R.A. Salvatore answering some questions we had for him regarding Drizzt, some underlying moral lessons, how it was writing with his son Geno, as well as a few others. I want to give special thanks to Philip McCall II for helping with the questions.  Also, be sure to check back in Wednesday for my review of The Ghost King.

You can also check out our first interview with R.A. Salvatore.

Without further interruption let us get into the questions.

It has been over 20 years since the publication of The Crystal Shard. Drizzt as a character was ground-breaking then. How do you think Drizzt has reshaped “anti-hero” roles in fantasy novels?

R.A. Salvatore:  Has Drizzt ever really been an anti-hero? I’m not sure, but to me, he’s pretty much followed his heart (and his heart is true) from the beginning. An unlikely hero, certainly. The classic outcast making his way through a world that doesn’t understand him, certainly. I think Jarlaxle or Entreri more fit the role of anti-hero – Jarlaxle because he’s really not a villain, just a guy trying to make it in a crazy world. Artemis Entreri, who was most certainly a villain when he started, about as pure a villain as you can imagine, has become an anti-hero to many people (at least, if e-mail is to be believed) because as we’ve gotten to know him, his view of the world seems less evil and more survival, his anger less vicious and more understandable. Entreri has drifted to those shades of gray that make villains so much more interesting.

Many fans believe there is an underlying moral lesson in each of your novels about Drizzt, that have ranged from racism to tolerance. Did you set out to teach your readers a lesson or did the concept arrive later upon natural progression to your own storytelling ability?

Probably more of the former, because when I started out, I was a typically cocky, know-it-all writer who thought his job was to change the world. In your twenties, you think you have all the answers, but then you get older and wiser and know that you know nothing about anything. Now I understand that my role is to entertain, perhaps to inspire, and hopefully to get the reader to ask the questions for which only he can supply the answers. The thing of it is, people read books for all kinds of reasons. Some people tell me they love my books because it’s light fantasy, kind of a popcorn thing for them. I agree and thank them.

Then the next e-mail will be from someone who describes a profound reaction to my book, sometimes claiming a life-changing experience. So for one guy, it’s popcorn, for the next, it’s profound. To me, both of those e-mails tell me that maybe I’ve done a little good in the world, and remind me that I’m incredibly privileged to be let into other people’s lives, just a little bit.

Drizzt has appeared in 16 novels produced by either TSR or Wizards. Looking back now, do you wish there is part of his tale that you would have done differently?

No. Not one bit. It’s been an organic journey; it’s like I tapped into this guy from another world, a magical world, and he’s just telling me his stories and I’m just writing them down. Things have happened that I haven’t liked, and yet, here I am, all these years later, rolling along a winding road with Drizzt and the gang and loving every minute of it. I can’t tell you how lucky I feel that these characters became a part of my life, and it truly feels like that to me.

In your upcoming novel, The Ghost King, we see the return of Cadderly from your Cleric Quintet and the powerful Crenshinibon. It would seem that you are bringing things full circle for Drizzt. Does this perhaps hint his story may be drawing to a close?

There’s a lot of closure in this book, to be sure. I can’t say much more than that, except that it was a painful book to write, and also, in the end, an incredibly satisfying one. I feel very comfortable with the “transitions.”

Your Drizzt novels have helped define the mysterious drow race that was previously only mentioned as a monster in the now legendary “Feind Folio” from the early Dungeons and Dragons® games. How difficult has it been to keep to keep Drizzt’s continuity with the ever-changing face of the Dungeons and Dragons game? Do you think Drizzt had a part in shaping the newer rules surrounding the drow race?

When I started writing Homeland those many years ago, I called TSR and asked for more material on the drow. I had the Fiend Folio and those great old modules following the classic “giant” series, but that was it. They informed me that, yes, that was it. I had been tasked with essentially creating drow society in the Forgotten Realms. I thought long and hard on how I wanted to shape this society. I knew it was matriarchal and the dastardly religion influenced it greatly, but what structure might support such a society without them all simply killing each other? True story, I got out my well-worn copy of Mario Puzo’s The Godfather and from the structures of the families described by Puzo, I created a skeletal template for Menzoberranzan. I went from there and am pretty happy with the result.

Continuity with the game is always a challenge.

One of the partners/admins here at the site. We do what we want. View more posts

3 replies on “The 7-part Interview Series with R.A. Salvatore continues”