I’m picking my way through Inherent Vice, and I’m not even quarter of the way through it yet but I wanted to post some informal thoughts.

By the end of the first chapter I was largely underwhelmed. I thought that the main character, Doc Sportello, was a doofus, and I didn’t care at all what he was going to do or what was in store for his future. This can be a problem when we are talking about a protag. 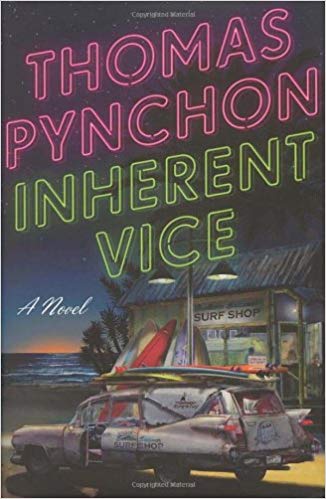 What is on full display is Pynchon’s ability to bruise a comma with detail-laden, paragraph-long sentences like few others can. This and this alone will probably be what people dislike about the book. For me, I love these descriptions and the details they present and the full range of senses they reach. One paragraph like this can, in some ways, paint a picture of a place and time better then something 10 times longer. It’s condensed and it’s concentrated but not diluted.

Doc had outrun souped-up Rollses full of indignant smack dealers on the Pasedena Freeway, doing a hundred in the fog and trying to steer clear through all of those crudely engineered curves, he’d walked up back alleys east of the L.A. River with nothing but a borrowed ‘fro pick in his baggies for protection, been in and out of the Hall of Justice while holding a small fortune in Vietnamese weed, and these days had nearly convinced himself all that reckless era was over with, but now he was beginning to feel deeply nervous again.

This one is even better. It gives us such an intensely focused look that you’re almost dizzy by the time you get to the end.

Doc’s office was located near the airport, off East Imperial. He shared the place with a Dr. Buddy Tubeside, whose practice consisted largely of injecting people with “vitamin B12,” a euphemism for the physician’s own blend of amphetamines. Today, early as it was, Doc still had to edge his way past a line of “B12”-deficient customers which already stretched back to the parking lot, beachtown housewives of a certain melancholy index, actors with casting calls to show up at, deeply tanned geezers looking ahead to an active day of schmoozing in the sun, stewardii just in off some high-stressed red-eye, even a few legit cases of pernicious anemia or vegetarian pregnancy, all shuffling along half asleep, chain-smoking, talking to themselves, sliding one by one into the lobby of the little cinder-block building through a turnstile, next to which, holding a clipboard and checking them in, stood Petunia Leewat, a stunner in a starched cap and micro-length medical outfit, not so much an actual nurse uniform as a lascivious commentary on one, which Dr. Tubeside claimed to’ve bought a truckload of from Frederick’s of Hollywood, in a variety of fashion pastels, today’s being aqua, at close to wholesale.

Each seeming sidetrack from the central narrative spins off its own ocean of story so that the sentence, and the story, spreads out in time and space encompassing so much more.

The second chapter opens with yet another great paragraph.

Doc took the freeway out. The eastbound lanes teemed with VW buses in jittering paisleys, primer-coated street hemis, woodies of authentic Dearborn pine, TV-star-piloted Porsches, Cadillacs carrying dentists to extramarital trysts, windowless vans with lurid teen dramas in progress inside, pickups with mattresses full of country cousins from the San Joaquin, all wheeling along together down into these great horizonless fields of housing, under the power transmission lines, everybody’s radios lasing on the same couple of AM stations, under a sky like watery milk, and the white bombardment of a sun smogged into only a smear of probability, out in whose light you began to wonder if anything you’d call psychedelic could ever happen, or if – bummer! – all this time it had really been going up north.

Every person and every object has its own history and story, and the whole of them are in this together and zooming off into the horizon. Every object and every person is infused with time, place and history, reaching a culminating effect.

I’m not saying that this style of writing is better then transparent prose or telegraphic prose, just that there should be as many avenues as possible to explore the crime fiction genre.

What strikes me about Doc is that he is a goof. Everything about him strikes me, maybe not as false, but as an affectation. Ornaments on a costume. Maybe he is meant to be a kind of dazzle camouflage , a collection of garish traits that prevent you from seeing the person. The white-guy afro and all that stuff about him…I dunno, something doesn’t smell right. Is the “Doc” persona something adopted, how old is Doc, and what is the “real” him? I can’t put my figure on it yet, but he feels like an impostor. Like a caricature of someone from the 60’s rather then someone more dully representative of the era.

Let’s look at a couple of quotes to explore this idea.

“Sportello. Try to drag your consciousness out of that old-time hard-boiled dick era, this is the Glass House wave of the future we’re in now.”

The character speaking could be chastising Doc for thinking that he is acting like an old PI, but what if Doc actually was an old PI and had just dove head first into the hippy scene that popped up around him for the sake of business.

Here is the more interesting of the two quotes:

In a former en suite broom closet at the office, Doc had assembled a collection of disguises. He decided today on a double-breasted velour suit from Zeidler & Zeidler, and found a short-hair wig that almost matched the suit. He considered a glue-on mustache but figured simpler would be better – switched his sandals for standard-issue loafers and put on a tie narrower and less colorful than currently fashionable, hoping Mrs. Wolfmann would read this as pathetically unhip. Looking in the mirror, he almost recognized himself.

Well, that’s interesting, wearing “normal” clothes Doc recognizes himself. Much like the hippy costume that the cop Bigfoot uses for his car commercial part, maybe Doc’s is more of a disguise then let on.

Everyone seems so sure of what the book’s themes are, primarily the death of the 60’s and the looming shadow of the Mansons, but what if the biggest theme of all turns out to be a subtle exploration of identity?  Who is Doc could be the biggest mystery of all in Inherent Vice.

I’m still reading, so we’ll see if there is anything to this, but hopefully it becomes food for thought.