Let me be honest:  Nocturne by Syrie James is not the sort of novel that I naturally gravitate to.  I read it because it was offered to me and sounded interesting enough to try–the sort of book that a friend lends you, or that you pick up from the airport bookstore’s limited options, at least for me.  The book does not attempt to hide what it’s about; if the cover doesn’t give it away, the first chapter from the hero’s point of view does, so I don’t feel it’s a spoiler to say that this is a vampire love story, and to admit that my primary point of interest was whether, in our collective exhaustion with the variations on the form, this new story might go back to what vampires are supposed to be. 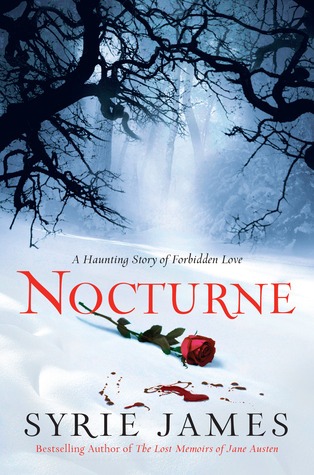 The story is of a woman whose car goes off a mountain road in a blizzard and is rescued by a reclusive vampire; the two of them are trapped in his house until the storm blows out and the roads can be cleared, and that time is life-changing for both of them.  The narrative had a strong sense of the original Beauty and the Beast fairy tale–she has dreams of him while she sleeps in his house, she’s trapped alone with him in the middle of nowhere, and the story’s main arc is whether she can see his inner beauty despite his beastly aspect (well, beastly in that he is a vampire; of course he’s superficially beautiful because naturally all vampires are beautiful, but, you know, we’re talking layers here).  I’ve always favored that particular fairy tale, so I enjoyed looking at a vampiric twist on it, and I honestly don’t know if it was intentional on James’ part or simply one of those lovely coincidences that English majors make their living off of.

The novel is not particularly long (not sure it hits 300 pages, if it does it’s because it’s airily laid out on the pages), and it is an easy read.  I started it one evening, and ended up finishing it that same night in a bout of insomnia after I had put it down to go to bed.  Yet it doesn’t feel rushed or dense; simply, the story takes place over the course of four days, and the events are chronicled thoroughly but not in excruciating detail.  There were places where the desciptions reminded me of the old melodramas–somewhat forced mentions of her “red-gold hair” and things like that–but, given that James wrote Dracula, My Love and The Lost Memoirs of Jane Austen, I would guess this is a stylistic choice on her part.  I found it a bit jarring, but if you like that style then this is a modern take on it, subdued and smoothed out compared to the old penny dreadfuls but still obvious.

Nocturne is one of those books that may be shelved in fiction, romance, or science fiction/fantasy, depending on the store.  My guess as to its most likely location is fiction/literature, based on James’ other books and the fact that it breaks some of the conventions of the romance genre, despite it reading in some ways like a wish list of romantic compatability.  (Be warned if you find the book in fiction or SFF:  it does have scenes of explicit sensuality, tastefully done but not the polite fade-to-black, either.)

Probably my favorite thing about the book is that it injects a realism into the choices the characters make that defies the usual “everything will work itself out” of most romantic fiction.  Sometimes there is no way to reconcile one path with another, and a choice has to be made.  This book forces the characters to make that choice, and I respect the author much more for not forcing a happy-in-every-aspect ending, because that would not have been the natural outcome of this scenario.  Not in the real world.  And that’s what this book strives to be, a what-would-really-happen look at such a situation.  Plus it gives the book as a whole this delightful feeling of incompleteness, and I mean that as a compliment.  It feels like the first movement of a symphony; you know there is more to the story.  The novel is a reminder par excellence that a story doesn’t end just because the book does, and that is something missing altogether too often from fiction.

(Final note:  if you read it and don’t feel satisfied with the ending, make sure you read the author’s note!)