MPD Psycho was a mini-series that came out in 2002 and was inspired by a Manga that came out in 1997. Dark Horse has been releasing the book in America since 2007. I’ve been meaning to jump into MPD – Psycho for a little while now and I’m finally starting to get caught up on it.

Jesus what a story. 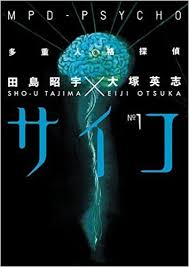 It has got to be one of the most deranged darkest, sickest, most twisted things ever. But in a good way. While certainly violent at times there isn’t anything sensationalized about the story and make no mistake, there is a story here.

Kobayashi is a police detective working on a particularly vicious serial killer case that involves dismembered bodies. The killer makes Kobayashi’s wife his next “victim”. Why in quotes? Because she’s kept alive after her arms and legs have been severed and shipped to Kobayashi at the police headquarters in a cold storage freezer. After finally dying he hunts down the killer and kills him. This act triggers a state of disassociation and he develops multiple personality disorder. Hence the play on words title. He goes to jail for killing his wife’s murderer and upon release he begins working for a private research firm that works with the police using his insight as a multiple and his skills as a detective to track down other killers. While the detective is a one of the dominant personalities the other dominate personality is a psycho killer.

That brief synopsis is just the first third or so of the first volume (of which there are 11) and is the launching point for the series. Obviously this isn’t a story for the faint of heart and easily offended. This is a dark and violent tale of epic proportions. By the end of the first volume a much larger scope of story is revealed, a revelation that will take the story, over the course of the remaining volumes, into territory that no reader will expect.

So, we have a killer who is also a police detective, which may remind some of another famous character, Dexter. It’s probably important, as I’ve stated before, to note that Dexter didn’t come about fully formed. It was a character that refined some pre-existing characters, stories and ideas that had been building for a couple of year and softened their sharp and jagged edges and made them more palatable. This may seem odd to those who are fans of the Dexter books, and particularly the show, that Dexter is somehow lighter fare. But nonetheless when placed in his proper context, which includes, in part, elements of The Silence of the Lambs (serial killer directly hunting or aiding in the hunt of another serial killer); the issue of Sandman titled “Collectors” (the almost secondary world interaction of serial killers); Blackburn (serial killer with morals and a code among others) and MPD Detective (killer who is the same character as a detective) it’s easy to see that something was brewing and the transformation into a more broadly commercial character.

The writing in MPD Psycho is restrained in contrast to some of the shock value moments, raising questions, doling out information, laying the foundation for future story, obfuscating and hiding things in plains sight. MPD is a complex story written for those readers wishing for a higher level of engagement. There is a large cast of characters and an increasingly complex and layered plot. Otsuka trusts his readers to be able to juggle all of the pertinent information.

But while he may trust in the reader he also plays with that trust by inverting many of the standards of the detective story. In addition to themes of identity, character and memory the creation of a police detective who is also a serial and or psycho killer cuts right to the very core of basic assumptions and truths about the character types and the story’s of them that we have read over the years.

The art is defined by its use of simple, clean and sparse lines that never draws attention to itself and brings the fullest impact to the story.