Lynn Kurland is the author of the Nine Kingdoms romantic fantasy series, as well as a best-selling romance author.  For all my love of dark, bloodspurting, knights who say–er, frak–fantasy, I also love the lighter side of fairy-tale, love-story high fantasy, so this series fits right in to one of my reading sweet spots.  I enjoyed the chance to ask Lynn some questions about how this series came about, what’s been most different for her in switching between genres, how far the story might go, and more.  Keep reading to find out what she had to say! 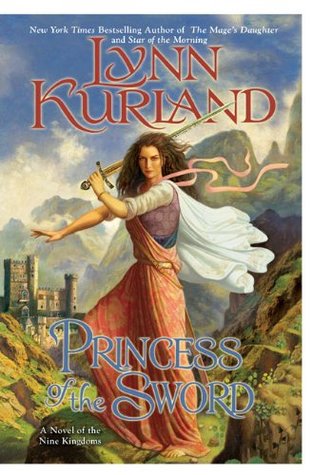 You can check out reviews of Lynn Kurland books as well.

Elena Nola:  What made you decide to write a fantasy series?  Or if it all started with just one novella in the To Weave a Web of Magic collection, what was the reason for that first novella?

Lynn Kurland:  I blame the whole thing on my 4th-grade librarian who read The Hobbit to us in class. I was immediately hooked. The only problem I had as I reread the entire LOTR series a dozen times over the ensuing dozen years was the abysmal lack of romance. (I mean, come on. An appendix to give me all the details I wanted about Arwen and Aragorn? If I had the chance to talk to the good professor, we would have words, believe me.) I started out writing romance because there’s nothing I love more than a good love story, and I wrote paranormal romance because I could get away with more fantastical elements (i.e., time travel, ghosts, etc.) than I could have in straight-up contemporary or historical romance.

So, even though I was wallowing in all the romance I wanted, I still harbored a secret desire to do fantasy with enough romance in it to suit me–a desire that was perhaps not so secret since my first editor, the fabulous Gail Fortune, had listened to me talk wistfully about it for years. She pulled together an anthology with Patricia McKillip, Sharon Shinn, and Clair Delacroix, then asked if I thought I could maybe come up with a fantasy novella of some sort to contribute. After I sat down and blew into a paper bag for a bit, I managed to gasp out a yes, and the Nine Kingdoms were on the map.

Tell me about some of the differences you’ve found with writing fantasy versus historical romance.  What’s been the hardest, what’s been the most fun, etc., about this series in contrast to your larger body of work?

I think the biggest difference is the opportunity to world-build on an entirely different scale. I’ve got my own set of quirks for my romances and my own rules about how time-traveling works and what ghosts can and can’t do, but the books are still fairly grounded in what I would consider to be everyday reality.

With fantasy, reality consists of an entirely different set of variables. Though the Nine Kingdoms still has the medieval feel I love, normal there means magic, and creatures from dreams, and good and evil/life and death on a scale I couldn’t reasonably address in any other genre.

I think the thing I’ve enjoyed the most about writing fantasy is the magical part of it. In real life, I’m a pretty realistic gal with dirt under my fingernails from my garden and drool on my hoodies from my kids’ horses. The chance to get lost in a world where spells can add all kinds of unexpected things, beautiful and sparkling–and not so beautiful and sparkling–is much more addicting than I had anticipated it would be.

The hardest thing for me–and I’ll admit freely that this has taken a lot out of me personally–is grappling with some of the weightier moral issues of good vs. evil. I would much rather have a villain who’s just a jerky ex-fiancé trying to ruin a heroine’s new romance than someone who’s out to destroy the world, but that’s not what I find myself facing in the Nine Kingdoms. In romances, I am for the most part doing light romantic comedies, which I absolutely love. The fantasies, though they do have humorous elements I would never turn my back on, have taken some soul searching to come to terms with how I would personally face the sort of evil my characters have to. I think they know all along what they’ll do. It just takes me a while to figure it out.

What has been the fan reaction to this series?  Going into it, did you think a lot of the same people would read both, or did you feel like this would be writing for a different audience?

I’ve had many readers willing to take a leap of faith and gained a few straight fantasy readers as well. I didn’t expect that my entire romance readership would follow me into fantasy. For some people, fantasy just doesn’t work, and I absolutely respect that. I have favorite authors who’ve written things that I haven’t loved. For those who have been interested in the Nine Kingdoms books, though, I think they’re in the same love-fantasy-but-need-a-bit-more-romance boat I’m in.

I’ve mentioned in my reviews of the Nine Kingdoms books that I, at least, read them as a little bit tongue-in-cheek, a little bit faux heroic tale told by a bard with a twinkle in his eye.  Is that the tone you’re after?  If so, how did you settle on that as the “voice” for this series as opposed to a more staid and serious one?

My biggest influences as a youth were Tolkien and Mad Magazine (with a little garage-sale-found Barbara Cartland thrown in), which probably tells you everything you need to know!

I guess the truth is, while I didn’t purposely set out to strive for a lighter tone, I just can’t seem to help myself. If I have the choice between laughing or crying, I’ll choose laughing every time. I won’t deny that I take the Nine Kingdoms books seriously and that I do find myself a little overwhelmed now and again by the subject matter, but in spite of that, I would rather go on that journey with characters who laugh now and then than those who take themselves too seriously.

If there is any intent in your characters and plotting to either pass a commentary on, or at least delicately satirize, heroic quest fantasy, can you tell me about why you chose to include that in your series?  (I have to admit, I’m a little bit afraid to ask this question because I have a wonderful fantasy in my head about you taking a very critical read-through of someone like Tolkien, and wondering why none of the wise characters ever tell the poor hobbits anything truly useful and why are there almost no “normal” people who ever cross the travelers’ paths, etc., so I hope you have a great story to explain this!)

I have an enormous amount of respect for writers, like our good Professor Tolkien, who have taken worlds we never could have imagined on our own and captured them on paper. His work literally changed my life. The scope and depth of the epic fantasies that now find themselves in print is truly impressive. I’m a huge fan of the idea of quests, simply because I think we all are on a quest of sorts, even if our journey is simply limited to getting from where we are to where we want to be.

That said, my favorite types of books are where the screen time is evenly balanced between the particulars of the quest and getting to know the characters involved in that quest. I think about the books I’ve loved the most over the course of my life, and while I might be a little vague on the particulars of the plot, I can remember the characters as if they were old friends.

It’s a personal thing that just works for me. I like the idea of normal, everyday people doing extraordinary things. With the occasional stop in the local Mini Mart to ask for directions, of course. 🙂

On the surface the main protagonists in both trilogies have a lot in common, but they seem to follow pretty distinctive paths toward developing a romantic connection. Was it an intentional choice on your part to explore how different people who might have a lot in common can, in fact, have very distinct experiences, or just a lovely coincidental parallel?

While I would like to say it’s just a happy coincidence, I’ll freely admit that I consciously set out to make sure whatever happens to my characters is specific to that set of characters.

I believe that most stories follow a general pattern. In romance, the basic formula is: boy meets girl; stuff happens; boy gets girl and they live happily ever after. I’m a classically trained musician, so I don’t consider these structural constraints to be a negative thing at all. On the contrary! Most pre-twentieth-century musicians followed accepted genre structures, yet the difference between a Mozart piano sonata and one written by Rachmaninoff is staggering. I look at romance–and fantasy or mystery, for that matter–with the same sort of awe. While the overall structure may be the same, the execution of the story within that format can have an infinite amount of variety.

I’ve been doing this now for over thirty books, so knowing that there’s no end to the ways I can combine different elements to make a unique story is very comforting. It’s what keeps me writing. I have to know how that set of characters deals with their unique set of issues, how that specific boy gets that particular girl, how that quest is accomplished by those particular players, how it all wraps up based on the characters involved.

Will the third book in Ruith and Sarah’s trilogy be the last Nine Kingdoms book?  If not…can you give any hints yet as to where you might go next (such as future, past, another contiguous/parallel story, etc.)?

Definitely not! I have more to do in this generation, but I would eventually like to go back in time and investigate a few things there as well. I think it’s time to make a genealogy chart or two . . .

Finally, what are you working on now and what’s coming up next for you?

I’m finishing up the last book of Ruith and Sarah’s trilogy, Gift of Magic, then I’m switching gears and jumping back into another romance that’s a bit of a follow-up to One Magic Moment that will be out this April 2011.