Those words are the summary the publishers chose to put on the back of Living with Ghosts, and I think they are as compelling and accurate a summation of this story and this world as possible.  The city of Merafi, built with blood bound into its stones to keep it safe from supernatural forces like ghosts and elemental magic, is under siege by two ambitious enemies of the state trying to unwork those bindings. 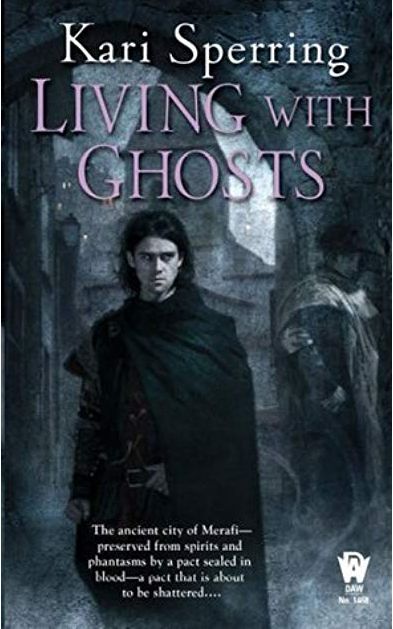 Already rain is falling unseasonably, and the river at the heart of Merafi’s commerce and location is rising.  A plague is breeding in the lower city, and civil unrest threatens the uneasy peace.  Creatures of mist and claws begin to roam the streets at night, and ghosts begin to rise and walk by day.

Standing against the Lunedithin prince and the Tarnaroqui priestess who seek to destroy Merafi are Gracielis, failed pupil of the priestess; Iareth Yscoithi, one of the prince’s bodyguards and old lover of dead Merafian lord Valderrian, and her father the shapeshifter Urien Armenwy; Miraude, Valderrians’s widow; Yvelliane, Valderrian’s sister and the queen’s First Councilor; Thiercelin, Yvelliane’s husband and Gracielis’s friend; and Joyain, a military officer caught up in the intrigues by his own bad luck as a soldier.  The threads binding them together are subtle and varied, but the one constant is the dead Valderrian of the Far Blays–who has risen from the grave to reclaim the love which was taken from him.

If they hope to save their city they must work together to re-make the old covenant…a task that may be impossible and will certainly require sacrificial blood to bind it.

This novel definitely fits what I consider to be dark fantasy.  Dark plots, dark magic, painful choices, and not much hope of coming out clean–if any of the characters can hope to come out alive at all.  It is also an urban fantasy in the sense of the term as a story set solely in a city, and where the city is almost a character in its own right.

There is a rather brilliant tension between the logical Merafians and the “illogical”–magical–foreigners, both the Tarnaroqui who are entirely foreign and the Lunedithins who are distant ancestors of Merafi still clinging to the old ways and the old powers.  Because this story could be about a historical city here on Earth, or even, in terms of attitudes, a modern one.  The river is rising.  There is a plague in the lower city.  It is raining and raining and raining.  And yet the citizens of Merafi do not believe it is anything supernatural.  Interestingly, even seeing the lengths that the characters go to in order to halt the dark magic, the reader can also almost take the attitude that it was all just a naturally occurring flood that happened because of excessive rains upriver that of course the Merafians would know nothing about in an age with no communication faster than horses.  The sickness could have come downriver on a barge or been brought in from abroad on a ship, and, of course, political concerns and civil conflict are always possible.  What keeps the story from being completely ambiguous is that Valderrian does come back from the dead, and the mist creatures really can rend and destroy flesh.

Beyond describing the events that happen, however, there was not much exposition concerning the magic of the world around Merafi.  This made the landscape both endlessly fascinating and almost frustratingly obtuse, but in the very best way.  The magic and the mysticism was not merely not over-explained but perhaps a bit under-explained.  From my observation, the common tendency in fantasy is to over-exposit the world-building.  This book does not; it allows the readers to let their imaginations take over and fill in the mostly blank canvas without authorial contradictions.  It does not explain the phenomena; it merely presents them, and the characters’ interpretations of them, and lets the readers make of them what they will.

On her website the author says of herself, “I write fantasy with a Dumas twist.”  I have to agree with her self-assessment because there was a certain distant elegance maintained at all times between the reader and the characters.  If you need to be inside a character’s head, this is not the book for you.  The story flows as inexorably and irresistibly as the river it describes.  Also as impersonally.  There was no quarter shown to the characters who may have “deserved” something better.  The events simply were.  They swirled about the people involved, building to a tragic and inevitable crescendo before receding back into the normal courses and channels of the world.  And like the flood of a great river, some of those caught in it were sucked beneath the undertow and lost while others were spit out safely upon the shore, battered and shaken and changed by the experience but essentially unharmed.

The execution of this book was great.  It was well-written.  It had an interesting set-up and scenario, characters who seemed truly human–flawed and wonderful both, and always conflicted–and a fascinating landscape that I am still thinking about.  If you like the grand, sweeping mode of storytelling that does not sink deeply into the characters’ innermost minds and describes an epic conflict, you will enjoy this book.