Patrick Rothfuss is a new author who has generated lots of buzz in the last couple of months, and now he’s  on Boomtron. His debut novel, The Name of the Wind, is the first installment of the The Kingkiller Chronicles trilogy. 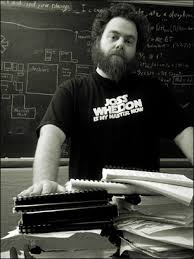 Enough with the introduction – and on to Patrick Rothfuss…

Patrick B. – Let’s get things started with the standard introduction: Who is Patrick Rothfuss?

Patrick B. – I suppose I deserved that.

Patrick B. – Why Science Fiction/Fantasy?

Patrick Rothfuss –What if the US was run like a corporation, and every citizen owned one share of voting stock?

You start with the premise and then see what the rational outcomes of that one change would be.

Dividends on the stock would be paid out, providing a small subsistence-level income for the poor or elderly. This would replace welfare and social security.

Parents would control their children’s votes until they came of age, complicating child custody battles. Companies could force employees to sign over their voting rights as a condition of employment, much like they currently do with engineers and patent rights.

People could even sell their voting shares, enabling the rich to build large portfolios of votes, and at the same time creating a whole new social class.

Actually, this is sounding like an interesting world…. Copyright. Copyright!

Patrick B. – You are an English Professor in the University of Wisconsin system.

Patrick B. – What’s the difference?

Patrick Rothfuss – From the student side, not much. I teach, I grade papers, I have an office. Most of my students don’t really understand the distinction. I certainly never did when I was going to school.

From my side the difference is fairly significant. I’m paid a lot less. I have less job security. And they don’t let me teach literature or creative writing. Only freshman English.

On the plus side, I don’t have to wear a tie.

Patrick B. – How has being a teacher influenced your writing?

Patrick Rothfuss – Not much, really. I wrote most of the trilogy back when I was a student, and I make so little money now as a teacher that I’m pretty much living the same student-type lifestyle. The main difference is that now when I go to class I’m the one in the front of the room. And I can’t just decide to skip a class if I feel like sleeping in.

Patrick B. – What particular areas of Literature did you study in your own schooling?

Patrick Rothfuss – I just studied whatever seemed interesting at the time. And I took classes offered by my favorite professors. A good professor will make anything interesting.

I really enjoyed Chaucer and Shakespeare, but everyone says that…

I took a class on Medieval drama, too. That was a blast. That helped me develop my concept of traveling theater troupes in my own world. Things like that are incredibly important to a culture. Those traveling performers were the medieval version of cable television, your Sunday newspaper, and a theme park all rolled up into one.

Patrick B. – Everyone always wants to know about what books an author is reading – so what’s on the bed stand right now?

Patrick Rothfuss – Agatha Heterodyne and the Circus of Dreams. It’s a graphic novel by Phil Foglio, #4 in the series. If you haven’t checked out his stuff, you really should.

Patrick B. – Do genre books play a more central role than others?

Patrick Rothfuss – Actually, I’m going to be irritating and answer your question with a question. What do you mean by genre books?

As time goes on I grow increasingly irritated at the term “Genre Fiction.” It seems to imply that one type of fiction, “Literary” fiction, is the only real fiction, and everything else is its ugly bastard cousin-in-law.

I say unto you. Literary fiction is a genre just like everything else. It has its rules and its foibles just like every other genre. And, like all other genres, 85% of literary fiction is pure shite. Pretentious, self-involved, artsy bullshit that neglects the things that make stories worthwhile. I’m talking about good language, good plot, good characters, and, hopefully, some sort of worthwhile content mingled throughout.

Now, lest people accuse me of being prejudiced, I’d like to say that the same is generally true of the fantasy genre. The difference is that literary fiction tends toward boring, empty stories that are either preachy or vapid. Fantasy, on the other hand, tends towards cliché stories about evil sorcerers trying to destroy the world. About young princes whose coming was foretold by prophecy. Elves with bows, magic swords, broody vampires, unicorns….

Patrick B. – Hold on. Unicorns are cliché crap? I thought I read somewhere that The Last Unicorn was your favorite novel.

Patrick Rothfuss – It is, or at least one of my favorites. In fact, that novel is probably the reason unicorn stories have become a little cliché. When someone writes something as dazzlingly brilliant as that novel, people want to imitate it. The result is a lot of less-than-brilliant knock-offs.

Elves, Dwarves, Goblin army, cursed ring, evil sorcerer. Tolkien did it. It rocked. Let’s move on. Let’s do something new.

Patrick B. – To be honest, I was hanging out a bit of bait with the original question to see how you would react to the word genre. While we are on the subject – The Name of the Wind does contain a number of fantasy tropes in it – tell us a bit about the decisions that go into including these tropes in your story.

Patrick Rothfuss – When I first sat down to write it, I thought, “I’m not doing to do anything even remotely cliché.” So I made a long list of the things that I felt had been overdone, and set out to avoid them.

The trouble is, some tropes are successful for good reasons, they serve a vital purpose in a story. It’s one thing to not want an evil-sorcerer type villain in your story, but it’s another thing to avoid having any sort of antagonist at all. A story without an antagonist gets weird pretty quick….

Also, some tropes are universal. Boy meets girl. Betrayal and revenge. The search to discover a hidden truth…. A mother’s love isn’t cliché, it’s universal. These things are archetypes. They’re the building blocks of myth and legend. They are a big part about what it means to be human.

Patrick B. – Using the first person narrative is a somewhat gutsy choice, especially for a debut novel. What led you to this choice? What’s your response to people who may be scared off by the first-person voice?

Patrick Rothfuss – Heh. You give me too much credit. I didn’t know it was gutsy when I started doing it. I just did what seemed natural to me. It felt good while I was writing it, and it sounded good reading it. I didn’t think I was doing anything odd.

Then when I was about three years into the project a friend pointed out that nobody did first person fantasy. That’s when I started to get nervous. But what could I do? Start over? No. I knew the story needed to be told this way. I trusted that if I told a good story people would enjoy it, regardless of the form. So far, that seems to have been the case.

Patrick B. – I heard that you also teach fencing – tell us how you got into that.

Patrick Rothfuss – I learned how to fence in college because…. well, mostly because I thought it would be cool to know how. I’ve done it off and on for about fifteen years or so. I’m not very good, honestly. I just have fun with it, goofing around with friends.

Patrick B. – Does your knowledge of fencing affect your writing in any way – so far I haven’t noticed many sword fights in The Kingkiller Chronicles.

Patrick Rothfuss – No, you’re right. Not much sword fighting in the first book. In the second book we get some, and in the third book even more.

To answer your question though, there’s very little fencing influence at all. Fencing is more a sport than a martial art. It would be like basing your knowledge of roman phalanx warfare on NFL football.

The fighting that happens in the books is more based on the martial arts I’ve taken. The sword fighting more influenced by the Tai Chi Chuan sword form than anything else, though I mingle in a lot of other elements depending on the situation.

Patrick B. – Daw seems to be giving you a bit of the star treatment for The Name of the Wind. Is it a bit overwhelming for you? How have things changed?

Patrick Rothfuss – My life is still pretty much the same as it was six months ago. I’m still living in the same student-rental style apartment. I still eat Chinese takeout and microwave burritos. I still play video games and waste time watching TV. So no, it’s not overwhelming. But then again, the book isn’t out yet. I haven’t received any huge royalty checks. Maybe then things will change.

Patrick B. – So things really aren’t that different?

Patrick Rothfuss – I don’t mean to imply that. I’m traveling more, doing lunch with PR people and book buyers and all that. I’m getting to talk to interesting people who love books as much as I do, people who are deeply interested in the craft of writing. I got to have dinner with Tad Williams last weekend. That was a lot of fun.

I’m also learning about the movie industry in a crash-course sort of way. That part has been a little overwhelming at times.

I’ve also received a few pro-invites to conventions, which is pretty cool. And now when I ask to be on panels, they actually schedule me. Before they just kind of looked at me as if to say, “Who the hell are you? Why would anyone want to listen to you talk?”

I’m really enjoying that. I love being on panels and running workshops about writing.

Patrick B. – Well, I’m glad things are looking up for you – maybe you’ll be able to advance to Thai takeout soon.

Patrick Rothfuss – I can only dream…..

Patrick B. – Thanks again for taking the time to do this – any parting thoughts to share?

Patrick Rothfuss – No real parting comments except to say thanks. It’s been fun.