With textual help from some well-known names, but primarily from the inspiration of classic Anglo-Saxon storysongs, Charles Vess has created a unique form of graphic novel. Recently reprinted in softcover, THE BOOK OF BALLADS is a gorgeous pictorial songbook, meriting exuberant praise and permanent shelf space for its artwork even above the rich story content. I warn you now that this review is lengthy, but there are thirteen different ballads, and this title deserves the attention. 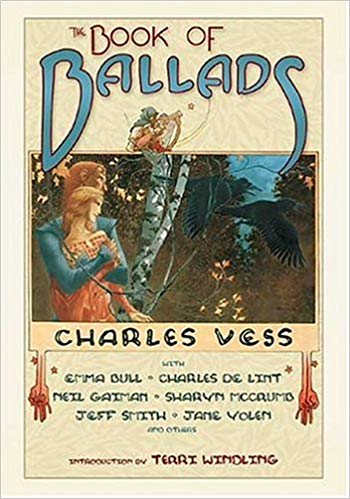 The ancient ballads were graphically scripted by Vess himself, celebrated visual artists Elaine Lee and Jeff Smith, as well as stellar authors Neil Gaiman, Jane Yolen, Sharyn McCrumb, Midori Snyder, Lee Smith, Delia Sherman, Charles de Lint, and Emma Bull, all of whom have been influenced in their careers by historic storytelling, mythology, and music. If this assembled pantheon reveals how well-regarded are Vess and the subject matter, the primary reason to grab this title is not for those individuals’ voices, because it seems a result of their respectful affections is largely to stand back and let the ballads do the work.

Each tale’s source is a folksong of English or Scottish vintage whose complete lyrics are reproduced at the end of its depiction. Often, the panel-by-panel text is simply extracted from the ballad, more a process of selection and clarification than invention. Since the script contributors are famously creative and voluble, we must assume it’s because they didn’t think they could improve on the originals. The retellings straying farthest are Twa Corbies (Two Crows) to which Charles de Lint adds a contemporary twist and The Black Fox, with which Emma Bull may have felt easier taking comedic liberties since it’s based on a modern song.

Though, faithful to the overarching theme, that song was developed from the shreds of a much-older Yorkshire folktale. Bull writes that “the lyrics had that wonderful feeling of having been polished by the centuries down to their essentials that all good old ballads have.”

Music journalist Ken Roseman has compiled a fine discography at the end which gives information about recording artists and sources where these tales may be heard as they were originally meant to be, sung and played. Finally mentioned, but occurring first, is a terrific and substantial introduction by noted fantasy editor and author Terri Windling. She gives a history of the balladic form, explains how they came to be collected and saved from oblivion by Francis James Child, and suggests keys to the fascination they still hold.

As a topical aside, recent research into why humans seem universally to tell stories points out that they aren’t merely history lessons or cultural education or even entertainment, but are all of these plus a method of psychological acclimation.

Safely distant examples of hardship and injustice introduce listeners, especially the young, to life’s potential for tragedy. They make sufferers feel less alone while suggesting appropriate methods of coping, even if sometimes by displaying the reverse behavior. The ballads included here touch upon duty, family, passion, betrayal, the darkest and most rapturous corners of humanity. They show that virtue doesn’t always triumph while expressing a clear judgment upon wickedness. And yet, perhaps because what long ago seemed inconsequential or well-enough understood has been stripped away, these stories are also provocatively strange.

Delia Sherman writes: “What I like best about ballads is that they’re plots with all the motivations left out. Why did young Randall’s stepmother want to poison him? Why choose eels? Why did Randall eat them (especially if they were green and yellow)? That’s a novel, or at least a short story.” The questions tickle, perhaps frustrate, the imagination, but a listener’s answers at ages twelve, twenty-five, or fifty will change, making these tales of lifelong interest.

If the Anglo-Saxon ballad is this book’s fascinating and worthy reason for existence, the overwhelming reason to acquire it is for Charles Vess’ art. The black-and-white panels are wonderfully composed and successfully meld differing styles and techniques together to great effect. Fittingly, they also express immense care and time.

Like those otherworldly curses that take years or lifetimes to unwind, this imaginatively conceived and beautifully detailed work could not have been quickly created. In fact, some of these versions were published years previously in small editions. The skillful, dramatic depictions invite readers to press their noses against the pages and disappear into the panels again and again.

When so much current work favors simple renderings with flat, colorful spaces, Vess’ density of lines in black-and-white feels wonderfully anachronistic. His concentration of time-consuming effort is appropriate to the pacing of his content and draws out, so to speak, the viewing experience of these centuries’ old fables.

Publishers Weekly compared Vess’ work here to Aubrey Beardsley’s, Gustave Dore’s, and Winsor McCay’s as well as the Pre-Raphaelites. (If the names don’t call a specific style to mind, a quick online search will provide examples recognizable by sight of these milestones in illustration, including Beardsley’s Art Nouveau abstraction, Dore’s impeccably refined textures, and McCay’s groundbreaking Sunday comic strip, Little Nemo.) This is heady company that Vess’ quality justifies, even if I’m not as convinced of the spot-on comparison.

The main subject of Vess’ images is usually finely rendered and where he extends this style to the backgrounds they’re deliciously like engravings, though I find Dore’s direct comparison a stretch, and historically a bit too early. Dore’s classical physiques and almost infinitely varied tones are not in evidence, even if he must generally be considered a beacon for every illustrator who came after.

In the ballad of The Galtee Farmer, Vess employs a looser, comic style with gestural cursive and little texture. Okay, this might be seen as relating to McCay’s simpler strips, though McCay has a persistent axis and angularity that I don’t see here either. I most identify the Beardsley influence, obvious in the flowing fairy hair and in backgrounds and borders where Vess often alternates his stroked linework with solid blacks pierced by simplified figures of such uniformly-wide curved lines they might be images etched in glass. Perhaps, if I overreach, there’s also a conceptual echo of Beardley’s open approach to the body in Vess’ naked forms, which are beautiful and not gratuitously detailed, but remain intimately and frankly sexual.

However, the comparisons I most favor are not nineteenth, but distinctly early twentieth-century, such as the master of pen-and-ink, Joseph Clement Coll, who also lent his considerable talents to illustrating tales of the fantastic. And latest and most closely, I perceive similar compositional sensibilities, level of detail, line quality, and treatment of the figure between Vess and John Rea Neill, the Royal Illustrator of Oz.

Whatever comparisons may exist or be most apt, it’s obvious that Vess’ own broad talents enjoy the unique visual potential offered within each ballad. In Thomas the Rhymer, he employs soft patches of shading, like rubbings from a charcoal stick. In The Three Lovers, Vess’ characters receive their most cinematically “Disneyfied” representation and the strong framing borders actually become a proscenium stage, enhancing the melodramatic aspects of the story.

In Twa Corbies, he is nearest to contemporary representational comics. Despite the variety, do not misjudge this book as experimentation in style, uneven riffs on a theme. Rather, this represents a culmination, a demonstration of Vess’ mastery, and at least one panel, more likely many, will take your breath away. Charles Vess does it all and well, and long before THE BOOK OF BALLADS becomes reference material for aspiring illustrators as it should, its eternal stories and virtuoso artwork ought to make it a dog-eared favorite among discriminating fans.