Imagine Borges and Dali hanging out at Pee Wee Herman’s playhouse, and you have a brief inkling of what Rosenbaum’s fiction is like. The Ant King and Other Stories is Rosenbaum’s debut collection of short fiction, which features pieces have been that have nominated for genre awards, and have appeared in a slew of venues, from Interzone, Realms of Fantasy, and McSweeney’s. 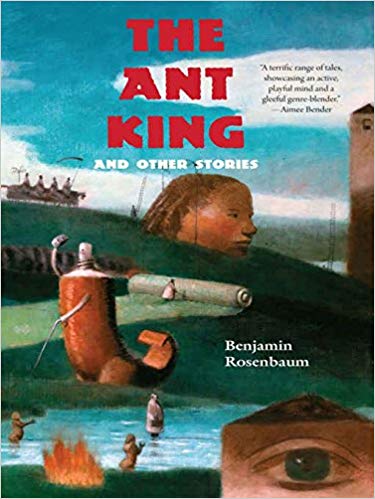 The content ranges from postmodern fables, flash fiction, pulp fiction, all told in precise and distinctive, if not exactly poetic, prose. The imagery—which is what propels the stories as much as plot—is always startling and surrealistic. Rosenbaum mixes literary forms and narrative styles like a DJ.

The Ant King. A California Fairytale. An absurdist piece about a dot com company owner in modern Silicon Valley searching for his girlfriend, who ahs been abducted by a hacker/being called The Ant King. As interesting as the plot machinations are (straight out of the Orpheus myth), the humorous Simpsons-like details are what make it a pleasure to read. Especially the character called Corpse.

Biographical Notes To ‘A Discourse on the Nature of Causality, with Air Planes,’ by Benjamin Rosenbaum. Metafiction meets swashbuckling highjinks in a world of zeppelins. Philosophical speculation and the energy of boy’s adventure fiction clash and join in inventive ways.

Valley of the Giants. A widowed woman goes search for This has a fable-like feel, with the magical language being a perfect match for the mysterious events.

Start the Clock. Golden Age style science fiction, where childhood can last forever. The humor is still in the story, with its kids who wear business suits, but there’s a note of seriousness that creeps in.

Embracing-the-New. A high fantasy piece that could have been written by one of the pulp masters, like Clark Ashton Smith. An apprentice makes a new god that espouses a heretical philosophy. This story was unputdownable.

Falling. A flash fiction piece set in a nanotech future that has the depth and complexity of a novella. Romantic and beautiful.

The House Beyond Your Sky. A mosaic slipstream story that mashes together a tale of an abused girl with the story of a mythical being who watches over her. It’s a metaphysical heartbreaking story that avoids mawkishness. Rosenbaum captures the wonder and terror of children

Other Cities. A travelogue full of miniature descriptions of fantastical cities, seemingly inspired by Italo Calvino’s Invisible Cities. From fantasy to allegory to science fiction, this travelogue features the best prose in the collection, with each word carefully chosen and placed. Rosenbaum is more like a jeweler here, than a DJ.

A Siege of Cranes. A mesmerizing fantasy horror story about a man who finds his village destroyed by an evil sorceress and his quest to avenge his family. The plot is truly unpredictable and like a rollercoaster ride.

Not all of the pieces in the collection worked for me. I found some pieces, like ‘The Orange’ too clever and the pastiche of Jane Austen’s ‘Sense and Sensibility’ went on for too long. But even these stories infectious, loopy wit and carefully crafted prose. The Ant King is highly recommended for fans of Kelly Link and M. Rickert.